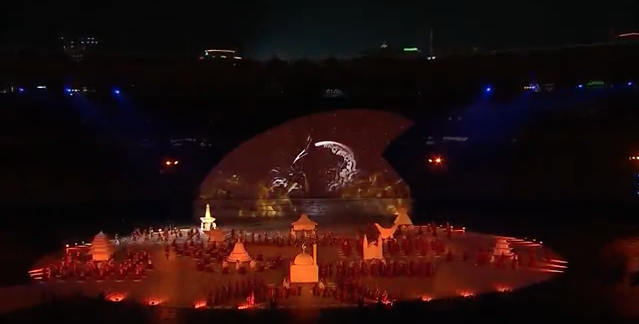 I am talking about the opening ceremony of the 2018 Asian Para Games. If you think I was being cold-hearted for temporarily forgetting about its existence, what do you think of the people who did know or remember about it and yet still think it is a waste of time and space?

It was bloody boring! Starting from the parade of nations, which began not long after the countdown, the pacing entered a lethargic snail mode. Of course, one could easily blame it on the wheelchair-using athletes who inevitably made the marches slower. But, look closer and you would see they were not at fault here (and blaming them straight away is a bit ableist, isn’t it? You prick…)

The atmosphere of the parade of nations was… well… non-existent. The lighting was lackluster. The background music consisted mostly of foreign-language pops which, while I appreciate for their internationalism, contributed nothing but being background noises. The set for that particular segment was sparsely designed. The spectatorship itself suffered from low attendance which resulting in muted cheers. After the parade ended, the snail mode lingered till the end.

The transitions between segments were not smooth at all. Sometimes, they consisted of silent moments that lasted more than five seconds! I was already turned bored by the parades and the poor continuations surely increased the boredom!

Even how the segments were executed also felt sluggish. The one where the Indonesian president was entrusted to be an archer ended feel anti-climatic; the unhurried emotional build-up quickly turned into stalling. Waiting for the leader to prepare himself was unbearable. I am not sure if it was the lack of rehearsal or, again, the lack of immersive atmosphere.

I usually don’t mind the heavy use of pre-recorded footage just like what they did in the 2012 London Olympics, as long as they perfectly compliment the live presentation. But here, it felt like it was produced to compensate the lifelessness of the live presentation. As a result, its presence became a sign of laziness and I became annoyed as well.

The ceremony’s conclusion was also not satisfactory. I do love the concept of gathering all of the previous performers for one last act to sing a song together. But, after the song ended, why did they just stand there like confused ducks? Why did they have to wait for the Indonesian president to (slowly) exit the venue?

Okay, I have to admit it something: I did not watch it to the actual last seconds of the broadcast which means I don’t know how the ceremony actually ended; I had to stop watching due to the second-hand embarrassment. But, even after a brief viewing, one could tell the organisers did not think things through.

Actually, the entire event clearly showed unpreparedness on their behalf! It was either they were not given enough time to design and rehearse the performances and not given enough funding or they didn’t take their duty seriously because it was just an event for disabled people. Personally, I believe it is the former and I will get into that later. While the flaws were a bit too overwhelming, the strengths were also too exceptional to ignore.

Literally the first thing I noticed about the show was its artistry. I dare to say that, excluding the parade of nations, every segment was quite artistic. The show preferred to utilised restrained yet thematically-appropriate colour palettes for each segment instead of the rainbow-like yet unrefined and uninspiring ones. Even though I don’t find the background music that impressive, it still complimented the visual presentation, bringing a pleasing aesthetic into being. It is a contrast to the more entertaining yet tackier opening ceremony of the Asian Games.

The Asian Para Games committee, on the other hand, assigned Jay Subiyakto. Apart from having a degree in architecture, he also has experiences designing stages and directing music videos for pop musicians (he created the first Indonesian music video accepted by MTV Asia), organising photography exhibitions, creating concepts for commercials and being the artistic directors of three theatrical productions. While he seems to prioritise beauty over amusement, he is still concerned about the latter. The end result is an artistic yet relatively accessible presentation.

Earlier on, I blamed the show’s unbearable pacing on the inadequate rehearsals and/or funding, not on the organisers not taking their duty seriously. I am inclined to believe that because the ceremony’s message has actual thematic depth, not whitewashed sentimentality of the Asian Games one. Let me start with the officials.

I never thought the lot of them would be genuinely charming. But, that’s the case with the ones who appeared the ceremony. For one, they were not hesitant to sway their hips to the upbeat music when the Indonesian delegates entered the stadium. They refused to be stuck-up. And I haven’t talked about their speeches yet.

Raja Sapta Oktohari, the organising committee chairman, and Majid Rashed, the Asian Paralympic Committee president, made genuinely uplifting speeches. While there was pandering, it was more inhibited compared to the one at Asian Games ceremony (I still cannot forgive Erick Thohir for his whitewashing of Indonesia’s social issues). But, between the two figures, I have to give Rashed a bigger praise.

His speech pointed out one ugly fact: Asia is still far from perfect when it comes to empowerment of disabled people. The splash of reality is something that we must commend. But, I never expected that to make the entirety feels heartwarming. Maybe, just maybe, the combination of positivity and harsh realism culminates in a sense of hope; contrary to popular belief, absolute positivity would give the complete opposite effect, for the less gullible people at least. And Rashed’s speech was not even the best part of the show.

At one segment, they erected giant 3D letters that formed the word ‘DISABILITY’. My initial reaction was ‘WTF?’; that seemed like giving a giant middle finger to every disabled person by reminding them of their unwanted physical limitation. But, the subsequent so-called ‘archery’ by the president showed how I was angered too soon.

When he went down from his VIP seat, he was greeted by a wheelchair-using girl who bestowed him a wooden box which, when opened, uncovered illuminated 3D letters that formed the word ‘ABILITY’, omitting the ‘DIS’ altogether.

The thematic depth climaxed after the president (supposedly) shot his arrow to the giant screen. Immediately, the giant ‘DIS’ letters crumbled while the ‘ABILITY’ ones stood strong and turned illuminated as well, reiterating the wooden box’s message, accentuating it as the spirit of the event.

I don’t know about how disabled people feel about this. But, as a person whose so-called ‘disabilities’ only extend to two speech impediments (stuttering and cluttering), I find that sincerely inspirational! It reminds us how not letting our minds to be utterly controlled by our bodily imperfection would give us accomplishment comparable to or even higher than other people’s.

Of course, some of you may perceive it as an example of idealism triumphing over realism… and I have to disagree. For me, believing that disabled people cannot be as masterly as their so-called more physically ‘abled’ counterparts is not grounded in reality.

For one, when a person has a ‘disability’, it does not afflict his/her entire corporeal being! He/she still have other functioning body parts! A defect does make life harder. But, to say that it is enough to make a person entirely incapable is surely an exaggeration on your part, isn’t it?
Either that or, despite your lack of physical handicap, you still feel insecure about yourself and, just like many insecure individuals out there, you lash out at the socially more marginalised groups like the ‘disabled’ people by propagandising ableist make-believe.

I know, I know. It sounds like I am arguing with non-existent people. But, judging by the comments I have read online and the fact that most places in the world are still not catered to disabled people, you can’t argue that ableism is not a thing. This is why I have to salute the organisers for their seemingly sincere concern of humans who are different from them. At least, such empathy can still exist in Indonesia.

I use the word ‘seemingly’ because I am making an assumption here. Realistically, I don’t know if the organisers had their hearts in the right place. But, they sure have won my heart.

Also, I may change my mind about the message. I may end up finding it flatulent or sentimental. Of course, this possibility does not change the fact it is still better than the one of Asian Games opening ceremony… with its shameless whitewashing of reality.