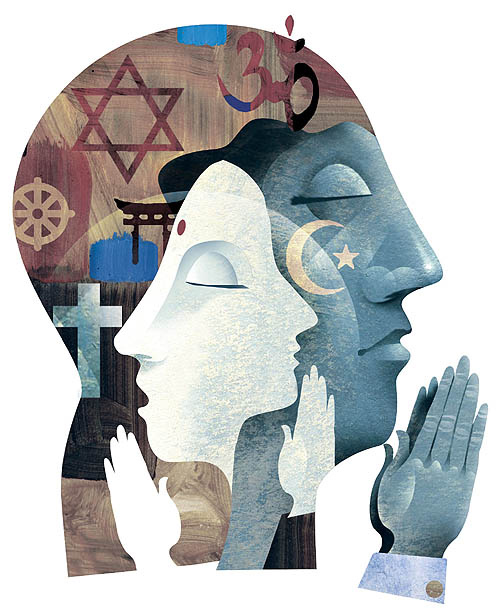 Yes, I do believe that, even if I agree all religions are inherently violent.

Religious extremists are indeed people we should be fearful of. But, we keep forgetting they are human beings who can pose actual threats to us, while the religions they adhere to… you know… are not human beings.

Everyone knows this as a fact… and yet, many are still unable to think clearly.

The thing about dangerous humans is they will always pose threats against us. It does not matter if they are wiped out of our memories and their existence is not documented anywhere. Their existence is unaffected by our obliviousness.

Religions, on the other hand, are sets of spiritual ideas which guide or dictate their adherents in how they live their lives, especially in searching for the meanings of life. Basically, religions are intangible non-living entities which entire existence is reliant on our memories and our records of them.

Once all of its records are lost, once it disappears from our memories, it will cease to exist.

Fear of extremism is a good thing; it shows that you still possess common sense and basic human decency. But, spending so much time fearing abstract entities is just too unreasonable for me to tolerate.

It may seem like I am making an apologetic to potentially dangerous religions (or ideas in general). Don’t get me wrong, I do think we should fear them. But, if we focus too much on them, we would ignore the actual root of the problem: humans.

From my limited observations, there are three types of people who will likely end up as extremists: those with no sense of directions, those who are unbelievably gullible and those who were already degenerate in the first place.

Those with no sense of directions are desperate to belong somewhere. They will join any communities which offer open arms, willingly overlook even the most blatant acts of immorality.

The gullible ones will take every word coming from supposedly authoritative sources for granted. Any sources can be authoritative for them; they can be clerics, politicians, fringe academics, entertainers…. and even anyone who constantly share conspiracy videos on WhatsApp groups.

The genuinely degenerate ones can be divided to two subgroups: those who feel empowered by extremist ideas and those who want to justify their degeneracy by making twisted interpretations of any beliefs they can get their hands on.

Even if you think my categorisation is too simplistic (and I agree with you), it is very hard for you to deny that humans are the roots of the problem.

We should help people overcoming their gullibility by teaching them critical thinking and making sure they are well-informed. We should help people -especially the young ones- feeling at home in the places they live in. We should encourage -and NOT forcing- people to be more moral if we want them to be genuinely moral; if that is hard to enact, the least we can do is making sure we are not empowering immoral people.

I acknowledge that my solutions are either vague or non-existent. But, at least, I also acknowledge that if we want to tackle extremism, we should also focus on preventing it from taking roots in the first place.

Getting too obsessed with the religions won’t tackle it, considering you are just waiting for the problems to start happening. Banning the religions also won’t cut it, considering those problematic people are ticking time bombs and anything –literally anything– can ignite them; the ban will only lead to a false sense of security.

I just realised this may also apply to violent entertainment. If someone becomes violent after enjoying certain works, that means they already had problems in the first place.

But, I choose to focus on religions because I am one of those people who can get heated when discussing them.