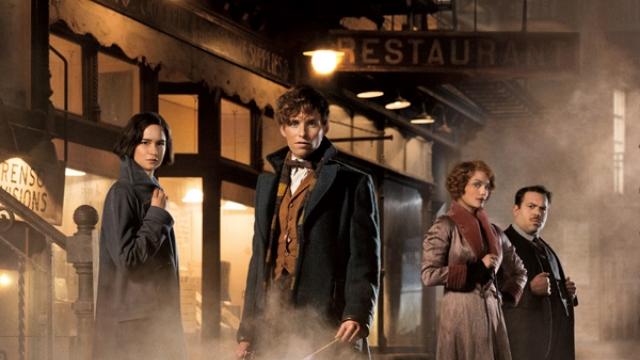 I hope you can survive my cringeworthy title, dear readers.

I am sure some of you immediately disagree with me. How about the Cursed Child, some of you may ask. Well, I haven’t read the script nor have I watched the live stage performance. My thoughts about it are purely formed out of other people’s synopses. So, apart from it being an official fan fiction, I cannot say much about it.

Besides, just like its predecessor, The Crimes of Grindewald was written by Rowling herself and deserves a space in the Harry Potter canon more than the other motion pictures in the franchise… and its high status is also the reason why it is one of the most disappointing among them. Before going to that, let me tell you one of the many reasons why I love the series: its revelations.

Obviously, I am not the only one who do for that reason. But, the mysteries and foreshadowing are often overlooked by anyone outside the fandom. I love how masterly Rowling places subtle clues all over; they make really good answers to the mysteries and good tip-offs to incoming events. Every revelation feels natural; they feel both surprising and foreseeable the same time, if that makes sense.

Devoted readers will definitely re-read the books and they will notice how the clues were sneakily implanted chapters or even books prior; devoted and observant ones will easily recall the clues without the need to turn the previous pages again. The fact that we, the readers, are allowed to play detectives even after encountering the revelations gives us an intense sense of joy! Despite the series’ many flaws, it still makes a compelling reading!

And The Crimes of Grindewald does the exact opposite.

Instead of dropping hints for future episodes, it prefers to dump a fuckload of information in a relatively short time slot! The audience is being denied the excitement and has to endure something comparable to a university lecture… if a university lecture is more than two hours long and the lecturer condenses most of the important bits near the end. Basically, it is worse than a university lecture! There is no captivating mystery and foreshadowing that makes Harry Potter fun in the first place!

I don’t know why this happens. Maybe she is forced to speed up the plot, maybe she no longer has the passion to write and she now sees her job as a mere job…

Or maybe, if we bring Occam’s Razor into this, she is an inexperienced screenwriter.

Prior to the first Fantastic Beasts film, she had never written a single script for a motion picture; her resume was all prose-writing. She does not know how to audiovisually convey the Harry Potter-esque detective role-playing. So, she ends up making an avalanche of information.

Of course, she could have hired an experienced professional as a co-screenwriter. She could also have delegated the job altogether. But nooooo! Despite having let screenwriters adapting her novels into films, despite having a fan fiction included in the Harry Potter canon, she now thinks it is her turn as an inexperienced person to write the scripts solo! It just does not make any sense!

Actually, after I think about it, that flaw is the least of the film’s problems (and, because I am already too emotionally invested in the flaw I just talked about, I need to write about it). In the end, we should be concerned about its focus.

When I first heard about the series, I actually expected it to be all about Newt Scamander’s (mis)adventures. After watching the first instalment, I really didn’t mind how it involves Grindewald. There is no doubt Newt will encounter humans who impede his quests. Not to mention Grindewald is a character that Dumbledore used to associate himself with and is often mentioned in The Deathly Hallows; his appearance signals to devoted potheads that this is indeed a Harry Potter story.

The series is called Fantastic Beasts, for fuck’s sake! It should be about Newt Scamander’s journey as a magizoologist, NOT a fucking action hero! If they want the main character to have such cliche characterisation, why can’t they be honest from the very beginning? Why do they have to double-cross us with that deceptive title? That’s like naming a series as Harry Potter and it turns out to be mainly about the fucking Dursleys!

I should also point out that the betrayal exposes how repetitive the franchise has become. The seven novels are already about ‘good versus evil’, which itself was already a cliche even before Philosopher’s Stone was first published! Why do they have to repeat the already-conventional theme?

The first film has been hailed by reasonable people for its main male protagonist who refuses to be stereotypically aggressive, insensitive and cocky. Such defiance of a tradition is a novelty in pop culture!

Just imagine: an entire series that tells the story of an unassuming young man discovering, protecting and learning about magical beasts, where combating fellow human beings is a mere part of the arbitrary subplots! Not only the series would be a pleasing anomaly in Hollywood, it would also be a trend-setter, altering the cultural norms for the better in which tenderness are not perceived as incompatible with masculinity and heroism.

But, nope. For whatever the reasons (to play safe, perhaps), someone decides they should continue upholding the status quo because progress is something that everyone should thrive to avoid.

If you think I am being judgmental cynic… well, can you blame me? Even if you hate or are unfamiliar with Harry Potter, you still can easily determine how Fantastic Beasts deliberately fracture its own backbone by chapter two. The flaw is just too great to ignore and, more importantly too sinful to turn a blind eye to. I deeply hate the adaptation of Order of the Phoenix and yet it is still far less insufferable than The Crimes of Grindewald.

If you pay attention, you would notice how the film perfectly symbolises this act of treachery:

In the beginning, our (supposed) hero Newt is being offered to have his international travel permit reinstated in exchange for assisting the ministry in fighting the dark side. Being a relative pacifist who seems uninterested in joining the establishment, he refuses the offer. His brother Theseus is disappointed with him, wishing he was the kind of person who is willing to take a bold moral stance. Near the end of the story, after experiencing a massive emotional toll of what he and others have just experienced, Newt decides to take the offer and finally taking a side.

In the eyes of his brother, Newt has decided to grow up and take a strong stance against evil. If you take the character development for granted, you would easily share Theseus’ perspective. But, this is Harry Potter franchise we are talking about here.

Anyone familiar with it knows how corrupt the Ministry of Magic is! I cannot talk for other potheads. But, in my eyes, Newt sells himself out to the brother he does not always get along with and the sleazy political establishment he works for, sacrificing his own ideals he had been holding on since the very beginning.

Symbolically, it exposes how a male lead character that defies long-held conventions regarding masculinity is being transformed into another stock character that pleases the cultural establishment who seems allergic to any signs of slight changes.

I am trying to be optimistic, forcing myself to believe that Rowling may have a delightful surprise for all of us. But, The Crimes of Crindewald has clearly revealed the true purpose of the series and I cannot ignore that! In the end, unless someone has a sudden change of heart, my optimism is and will always be a wishful thinking.