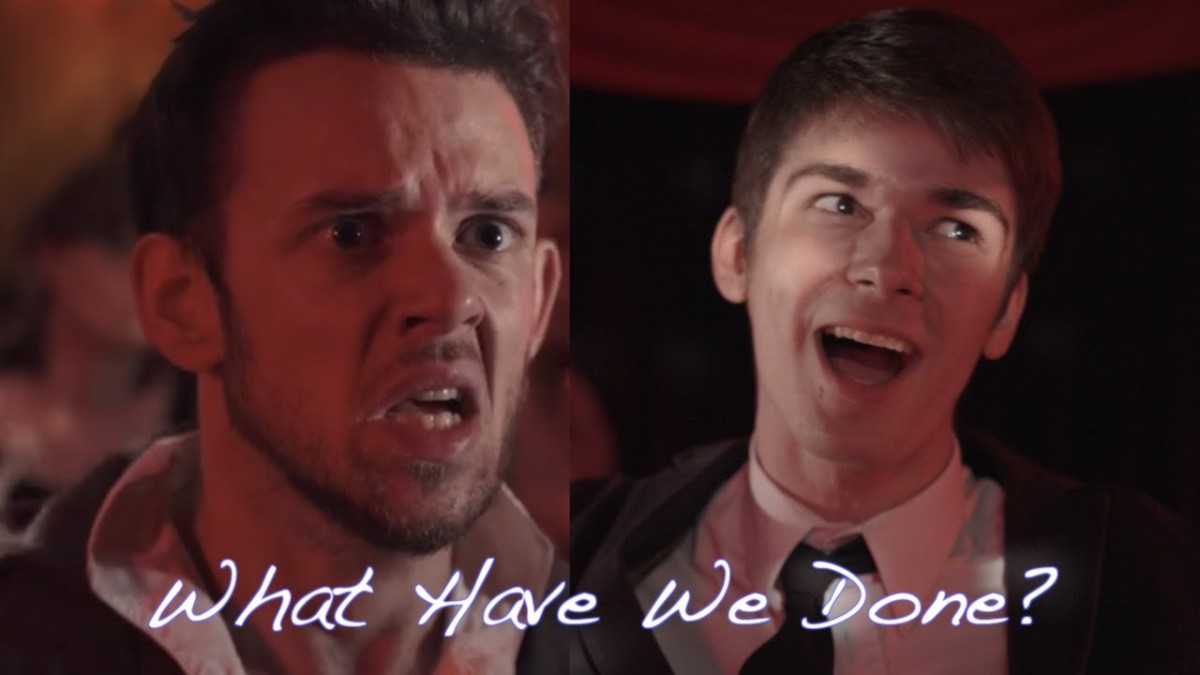 A revised version of a university assignment I made in 2014. We were assigned to analyse a work of art and entertainment that includes new media as its main focus:

Because of its increasing importance in society, cultural representations of the new media has been getting more prominent recently. What Have We Done? is a good example. It is a 2014 short film directed by Sammy Paul and Tim Hautekiet. It is interesting to point out that both people are Youtubers and the film was uploaded to Hautekiet’s Youtube channel. Basically, the directors and the film are parts of the new media themselves. This essay will discuss how the film portrays it. But first, I will have to summarise the plot (to watch the film, click here):

The film is a musical and most of the dialogues are singing. It tells the story about a 19th century Englishman named William Sturgeon, who travelled to the future with his own time machine. The reason why he visited the future is he was disillusioned by the human society and he believed in the existence utopia. In the 21st century, he met a character portrayed by Tim Hautekiet himself Sturgeon asked Hautekiet to introduce him to the achievements of mankind in which the latter eagerly did. But soon, the 19th century man was even more disillusioned; he realised that humans have regressed. Instead of being used for the greater good, technology is used for the complete opposite. Humans are getting less intellectual, more detached from each other and worse, more dehumanised. Sturgeon decided to go back to his time and destroyed the time machine.

The most obvious aspect of the film is its music; it is banal and mostly lighthearted. The banality represents how humans never learn from our mistakes. Ignorance is caused by the lack of knowledge and lack of interaction with people from different backgrounds. The film strongly implies that every single generation in human history is guilty of it. The same thing keeps repeating itself. The lightheartedness represents how humans, including Hautekiet’s character, are apathetic to human regression; sometimes we even cherish it. That is represented by his cheerfulness.

But, the film’s lighthearted music can be perceived as sarcastic and it is possible that Hautekiet’s character is acting so the whole time. According to Miranda Bruce-Mitford (1996, p. 80), “music represents the ordered pattern of the universe”. The music successfully represents the universe portrayed by the film. Musical films often include dance numbers and What Have We Done? (2014) is no exception.

Bruce-Mitford (1996, p. 76) describes dancing as ritualistic movements that emit energies. The film has two dance numbers. The first one features banal and light-hearted dancing; music and dancing have to compliment each other in a musical. Like the music, the dancing represents how humans keep repeating the same mistakes and how we deal with regression; again, the lightheartedness can be interpreted as either cherishing the regression or being sarcastic to it. These actions can be seen as quite ritualistic.

The second dance number is less unoriginal and less cheerful. Every single dancer is shown with a mobile device in his/her hand. Most of them dance with stilted movements and expressionless faces. Four of them dance in couples and their eyes are glued to their mobile devices instead of their partners. They represent humans who are enslaved by technology; they seem not to have lives of their own and when they do, their lives are dedicated solely to the technology instead to their loved ones.

It should be noted the colour red is prominent in the second dance scene. Red represents danger (Bruce-Mitford 1996, p. 106). The film is warning us that if we are not careful, we would be enslaved by technology. From the surface, the visual and musical aspects may be very important to viewers. But, if one digs deeper, one would encounter strong ontological elements.

In the second dance number, Hautekiet sings these lines:

It’s a pretty sweet deal But your soul is the price!

These lines refer to human habits of buying stuff we do not need and misusing the internet. At the exact moment he sings ‘but your soul is the price’, Hautekiet’s face changes its appearance: his skin turns greenish and his eyes become larger and blacker. He also sings that line with demonic voice. Green represents decay and black represents destruction (Bruce-Mitford 1996, pp. 106-107). Our bodies are decaying in a figurative sense because we are not using them and our minds are always somewhere else. We are destroying our souls because we are detaching ourselves from the physical reality. I refrain myself from using the word “destructing” because it implies that the act is deliberate. It is debatable whether we are deliberately destroying our souls or not. But, it raises another question: what is a “soul”?

“Soul” is a very abstract concept and there is no universally-accepted definition of it. I define it as a concept of “self” and that is definition I am going to use. There are four different ideas of “self”: dualism, materialism, monistic pantheism and no-self (Meister 2009, pp. 190-196). Dualism is the idea of mind and body as two separate entities. Materialism states that nothing exists beyond the material world. Monistic pantheism is a combination of two ideas: monism, in which everything is one and inseparable from each other, and pantheism, in which everything is divine. No-self believes that “the individual self does not exist”. In some ways, those four ideas are represented in the film.

Dualism is represented by the way people dance. Their bodies are shown to be dancing. But judging from their faces, their minds are somewhere else; their bodies and minds do not influence each other. But then, the dualist nature can also be easily refuted by materialism because how a human brain works also influence the mind (Kim 1996, p. 47). Most of the dancers may have their minds somewhere else. But, their minds become static because their brains are controlled by their mobile devices and their dance movements can be described as static as well; they seem to be directly controlled by the brains.

Materialism can also be used to partially support monistic pantheism. I said partially because monism is shown by the fact that mind and body are inseparable and the film’s materialist idea does not support pantheism because technology is shown as the one and only divine object; pantheism believes everything is equally divine. It is also can be said that materialism also supports the No-Self idea in a way; our minds are influenced by our bodies, which are also influenced by the environments. In a way, those dancers can also be described as not having independent selves. The film has strong elements of dualism, but they can be easily refuted by the other three ideas. I have discussed about the artistic and ontological elements. The last thing I am going to discuss about is how the film portrays human communication.

In the film, humans are described as not unwilling to learn from their ancestors’ mistakes, even with more than adequate technology. Human minds are portrayed as slaves to the new technology instead of the opposite. From the surface, the film seems to portray human communications being destroyed by technology. But, it is not destroying communications, it is changing them.